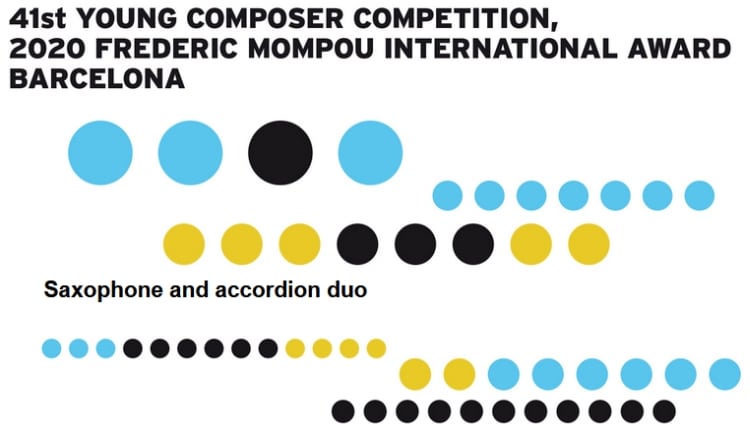 Any composer who is no older than 35 on 31 December 2020 can participate in this competition. The works must be completely unknown. They must not have been previously performed, published or disseminated in any format.

This year, the work must be for:
Saxophone and accordion duo. The saxophone can either be soprano, contralto or tenor. These instruments may be alternated as long as they can be played by the same performer.

The style and scoring methods of the work are completely unrestricted. The recommended duration is between 10 and 18 minutes.

The Frederic Mompou International Award for 2020 consists of:

The Frederic Mompou International Award cannot be shared or declared void. The jury reserves the right to award two honorary mentions. This year’s winner cannot compete again until the competition of 2023.

Presentation of the scores

How to send the scores

A sealed envelope, bearing the same pseudonym, and containing: entry form, duly completed, photocopy of identity card, passport or proof of identity and a brief curriculum vitae. The six scores and the sealed envelope must be sent to:

Participants must inform the organisation at jmb@jmbarcelona.com that scores have been submitted.

The scores that arrive by only one of these means will not be accepted.

Scores that have been sent by registered post before this date will be accepted. One copy of the scores presented will be kept in the entity’s archive. The remaining copies will be destroyed.

The jury will be made up of five professionals of recognised prestige in the world of contemporary music. Their identity will be disclosed when the verdict is made public. The decision of the jury will be taken by absolute majority and the verdict will not be open to appeal. Once the verdict has been made and it is found that the winning work or its author has not complied with all the rules, the composer will be stripped of the award. The verdict will be announced before the end of October 2020.

Once the verdict has been announced, the award will be presented. In accordance with JMB’s concert programme, the award-winning work will be premiered on the “Xarxa de Músiques a Catalunya” concert tour or at other concerts organised by Joventuts Musicals. The work will be recorded and broadcast on the Catalan radio station Catalunya Música or on other media decided by the organisation. The intellectual property rights will belong to the composer. In future recordings and programmes, the following text must appear: “Frederic Mompou International Award in the Young Composer Competition organized by Joventuts Musicals de Barcelona, 2020”. Once the award has been made, the winner will be required to present a copy of the score in the Finale or Sibelius. Editorial Boileau has the publishing and marketing rights to the score.

The winner must accept this point regardless of other publishing commitments.