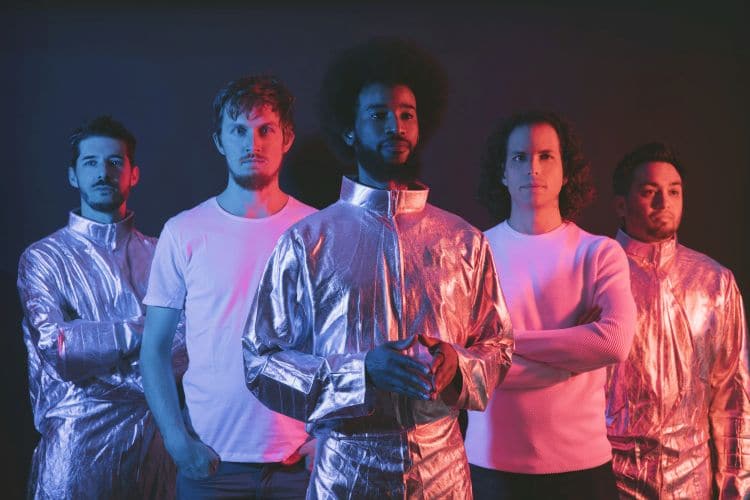 The title of the Sketches On Duality – album, Spectrum, is rather vague. What does it ultimately stand for?

Jahson the Scientist: It’s a bit of a metaphor; it’s a play on our name, sketches, obviously, it brings up the idea of color and playing with color and so on, but musically we do the same. We use a lot of textures, we take from different genres, definitely. Everyone here has a jazz background, but they also have other loves, from rock to hip-hop and it goes on, so yeah…

“We’re not confining ourselves (…), we are just reaching multiple spots at the same time.”

In your press text you call your sounds “stretch music”. What exactly do you mean by that?

Jahson the Scientist: Uhm, maybe one of these guys is better equipped to explain it more technically, but it’s kind of a new development for music; you have a lot of new jazz artists hitting groovey music that kind of molds the two, so it’s kinda stretching the groove, that’s one of the takes I get from this kind of music.

Philipp Kienberger: It also references to the rhythm, to our way of developing the grooves. We work a lot with shuffle grooves, and how to shuffle them. Like a way of stretching, you know…

Michael Prowaznik: And also stretching genre-borders, I’d say. We’re not confining ourselves to what the sounds or a particular form of expression will be, we are just reaching for multiple spots at the same time.

You’re releasing all three songs from your self-titled EP (2017) again on SPECTRUM (‘Michelangelo’, ‘Brickwork’ and ‘Consolamentum’). Are there any alterations to the songs aside from production?

Felipe Scolfaro Crema: No, it’s the same stuff. Actually, there were no additional recordings on those three songs, but the sound design got ‘redesigned’, you could say. The goal was to get to a sound that was more comparable (to) the experience that we have on stage, and that we get to the audience. As a concept also, you cannot, at least the way I believed it (and everybody got happier with it the more it progressed), you won’t get the same experience through two speakers you’d get on stage, so the songs had to be kind of more readily processed, more readily worked towards something edgier. I think if you compare the three songs as they were before and are now, you get a very clear idea of what caused the shift there.

Jahson the Scientist: Basically it was our first recordings on the EP, and we just went for a standard band sound.We wanted to record our music and get it out to the public. Over time leading upto the album, we made some decisions about really going for a production style, and not just a live-band set-up with standard recordings. We decided to push it production-wise, and that’s why we brought those songs back and revamped them.

Felipe Scolfaro Crema: At least not so much in the way we play, or in the style, but we distanced ourselves from that live jazz-band sound, because it didn’t translate so nicely and our energy wasn’t so clear. I think what was achieved in the end product, is more energy.

I didn’t produce the EP. I had produced other stuff, but way before, and then I went more into studying music and just playing piano and kind of buried this producer side of myself. Then we were all kind of unhappy with the sound we recorded and I had this idea of how we should sound but no one would do that for us, no one could get us that sound. It became kinda clear that we need someone in the band to get their hands on it. So for some reasons I woke up and just worked on it for three months straight without stopping.

Michael Prowaznik: Also the thing is, we really like those songs, and really want people to hear them, so it would have been a drag not to put them on the album.

So what does your production or song writing process look like?

Jahson the Scientist: It’s a combination (of things). People come with ideas, so (let’s say) we started with some ideas from Felipe and moved on to some ideas from Philipp. We take them into the rehearsal room, everyone puts in their bit and builds it into a body and chooses arrangements and that kinda stuff, so it develops like that, and that’s how the majority of the songs are developed. Sometimes we jam and some lyrics will pop out, other times we jam on stage; we’ve got six or so songs to perform and we jam a couple of others at the live shows, and those things start to take some shape and arrangement, and some parts we might like, other parts not. We take the parts we like to the next show, while some songs were actually developed live on the stage too. They evolved literally over a good year and a half from when the ideas first popped up.

And when do the lyrics come in?

Jahson the Scientist: When we are jamming; lyric ideas pop up –theme, rhythm and, you know, whatever else may be needed – and then I polish them, often at home. The first time most of us are hearing something is after one of these guys [gestures to his bandmates] makes a sketch or outline of a track, and then everyone else gives their input. Now we kinda know our part of that process, and we signal to each other “we like that bit – alright cool, I’ll stick to that and find something else that could come next” and that’s kinda how we influence each other.

Felipe Scolfaro Crema: It’s kind of a weird, utopian democracy were everybody has to be happy and also has veto powers, which is super weird, when four people like something but one of the guys says “nah” then it’s over, it’s not happening.

Heli Mühlbacher: It takes a bit longer sometimes, but I think in the end it feels stronger, the music’s stronger…

Michael Prowaznik: …like a highly educated garage band. (everybody laughs)

You release via 9star Records, which is basically a self-release – what do you make of that? Is it the better model nowadays or does it still have advantages to be backed by a (major) label?

Jahson the Scientist:  I’m at a point in my life where I really don’t like waiting. The modern erais built for independence. At this present moment in time, for us to get widely known, it has to be a step-by-step thing, there is no magic dust to throw. If a label was to offer us something, for me, from my perspective, they would have to offer something  substantial. Basically, we have a team that’s able to take care of so many things that there is no need to bring in someone to do the same job that we can do independently, unless they can offer something of value. In today’s era, you are able to get distribution relatively easily, because of the band’s presence they’re able to get HOANZL on board for distribution; we didn’t need a large catalogue, you know what I mean, so that’s of the strength of the band alone. Beyond that, we got videos, the necessary press material, there are teams of people we have who can do this, so it’s like a collaborative effort to produce something that matches with other labels around; we can do it independently.

Felipe Scolfaro Crema: And the way the album was put together, since we did all the work, everything from promotion to booking to production, taking everything in our hands, it relatively quickly came to a point where (we were like), “ok, this is over, it wouldn’t make sense to sign and give away the record when we actually did all the work”…

You release on CD, vinyl, and even tape. How does that work out for you?

Michael Prowaznik: It’s something to give out to people after the concerts, like merchandise…

Differently put: are streams and clicks of any importance to you?

Heli Mühlbacher: I mean, hopefully, right? The problem on Facebook or social media is to get the reach…

Felipe Scolfaro Crema: …that has been our topic of discussion over the last couple of days: you release the record and it’s hard to get it to people. We don’t even need to look much further back. In 2016, when we released our first video, we got 2,000 to 3,000 clicks in 3 or 4 days, something like this. We had a smaller fanbase, we were a younger band, but the algorithm on Facebook wasn’t as machiavellian as it is nowadays. You can see it with other bands, everyone is reaching fewer people, it’s super-annoying actually. You’re trying to get your material out digitally, but you are basically censored unless you pay a lot of money.

Your release show will be in the Porgy & Bess, which is kind of a holy place, a distinguished location for jazz concerts. How nervous are you?

Jahson the Scientist: Yeah I think it means a lot to us, and that’s where the feelings inside kick in. We’ve all hit that stage before, we’re familiar with it.it’s home territory for us, but it means a lot.

Felipe Scolfaro Crema: For me personally it’s a real honor, some of my musical idols have played there. When Thundercat comes to Vienna, he plays at Porgy & Bess; Robert Glasper has played at Porgy & Bess…

Michael Prowaznik: And Hiatus Kaiyote, too. That was great!

Jahson the Scientist: That one was amazing!

Heli Mühlbacher: A lot of bands we really, really love.

Felipe Scolfaro Crema: It’s not like just like they (P&B) are thinking about jazz as, you know, sixties jazz. It’s also a lot of what’s happening now that’s happening there, so it is really great to be a part of this.

Philipp Kienberger: And they just have really good sound.

“After an album is before an album”

So what does the future hold beyond the release show?

Philipp Kienberger: We’ve got a few shows coming up. Popfest, we also do Afrika Tage…

Jahson the Scientist: Waves Festival also, we just announced it.

Philipp Kienberger: After an album is before an album.

Thank you very much for your time, gentlemen!