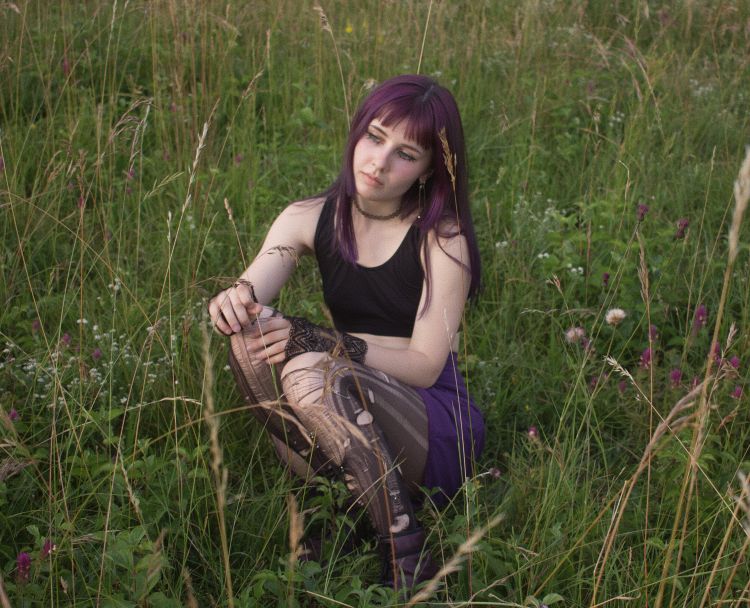 Madishu: What I can say is that we are still trying to find our sound or distinct Madishu-sound. We started to work on our EP a long time ago. I started writing on the songs a lot before, we even started to work on it together. In my opinion, the songs work well together in terms of their stories and the vibe. But for the different styles and feelings of the songs, it is always my goal that on a mixtape, the songs don’t sound the same. We don’t want the listeners to get bored when they listen to an album from the beginning to the end.

David Theni: The other thing is that we as artists simply get bored after a while when we keep doing the same thing over and over. It helps us to keep everything fresh when every song brings a new challenge, that you have to figure out a little bit. When you look at songs like “The Devil Is a Girl“, and “m8 come over“, these songs have a very different instrumentation, a very different feeling, although they are connected story wise. It’s a way for us to keep it interesting for ourselves. Not just for the listeners.

Madishu: It’s also the story behind every song that leads to a certain vibe and style. “Good Night“ for example is supposed to be the ending of the EP. Therefore, the song is very laid-back. We initially planned a very short outro for the EP. At some point, we wanted only vocals, at some point only an instrumental. But then I wrote the song in a day and I was like, ”you know, I really like what came out, let’s put this song on the EP as well.

What I also enjoyed was the depth of your music. Your songs aren’t superficial. You have something to say. And this is something that one feels when they listen to your music.

Madishu: That’s very nice to hear. There’s a whole story behind the songs. The EP is about a one-sided crush, but from all perspectives. One doesn’t know about it. The other one doesn’t find a way to tell the other one that they have a crush on the other person.  It’s about the frustration when someone doesn’t get the hint, etc.

“I’m just trying to come up with that something that makes people say, oh yeah, this is Madishu.”

You told us before that you are still searching for the unmistakable Madishu-sound. How close, do you think, did you get to this sound on your EP?

Madishu: I think, compared to the last EP, we got a lot closer to our style. A least I’m a lot closer to my goal, musically as well as visually. I’m just trying to come up with that something that makes people say, oh yeah, this is Madishu.

How and when did you both meet? And what was the reason that made you work together?

David Theni: We both went to the same music college. At that time, I was finishing up and Madishu was starting. I always liked to check out the new people and see what they are doing musically, what their style is or their vibe. And I did the same with Madishu’s music on Soundcloud a year ago. What I thought was that the songs were very cool. But the production wasn’t where it could be. I contacted Madishu on Instagram and wrote her that I liked her songs, but I thought I can help with production. This was pretty much how we started. And this is still the way we split up our work. 95 % of what I do is production, mixing and recording, and Madishu does mostly songwriting. But with time we also started to help each other out where we can. Madishu basically produced “Good Night“, where I just was co-producer. On the other hand, I started doing more songwriting and going through songs that Madishu gives me.

How much do you learn from each other?

Madishu: Everything is a constant learning process. We learn from each other and together we learn from other people as well. You never stop learning. There’s always something new to learn, new styles to approach, new music to listen to, new things to try.

David: It’s also important to mention that we built up a professional relationship that is honest and free of judgment. I could never imagine working with a person to whom I couldn’t be honest. There needs to be a certain level of honesty and a kind of straight forwardness. You can learn from each other. If I always say that everything sounds great, you wouldn’t learn anything. If you say that all I do production wise always sounds great, I wouldn’t learn anything. There needs to be that level of professional honesty for both to get a learning experience out of it.

That sounds like that you really work hard on your music. Are you perfectionists?

Madishu: That’s a very good question. I would say it depends on the song. You could work on a song forever. There’s always something, that you could change, and there are always new things that come to your mind. To write and produce a song is not a one-day process. It usually takes us weeks to write a song. You always learn new stuff and when come home you think that you could have done this and that differently. The song is ready when you feel that you can let it go.

David Theni: It comes in stages a little bit. There is definitely a time and a place for just letting everything happen and walking down eighteen different roads to see which one works. But there is also the time and place for a deadline, for the decision which road you finally want to take. And you never know whether it’s the best one, but it is what it is at that moment.

Can you tell me something about your musical influences?

Madishu: There are so many artists I look up to. But I think I can narrow it down to a couple of different artists like Melanie Martinez. The ideology behind her music and the way she connects music with visual art is something that I relate to a lot. Also, her baby-goth style and her way not to be afraid to express herself and be different. I also look up to Ariane Grande and Mariah Carey and Beyoncé for their amazing vocals and insanely good stage performances. There are so many artists that are amazing songwriters. Too many to mention.

David Theni: I’m fascinated by people who have an all-round-package. For example, Finneas, who does amazing songwriting and is an amazing producer. At the same time, he is a great artist and performer. Another example is Prince. Besides having been a songwriter, performer and producer, he was also very experimental with new technologies and ways of using new instruments. Phil Collins is another artist that I admire. Those are the people that I look up most, I would say.

Madishu, if I may ask, where do you come from?

Madishu: I was born in Moldova. I am Romanian. Later, I lived in the US for a while. I identify more as a global citizen. I’d rather travel and live in different countries instead of settling down in one country. I don’t have the feeling that my cultural background is Moldovan enough to identify myself as Moldovan.

“I was constantly exposed to music.”

And when did you start to make music? When did you have the idea to become a musician?

Madishu: I started playing piano at the age of three. And the longer I played, the more my passion for music grew. My parents traveled a lot when I was a kid. And they always brought home different instruments from different countries. And different music. I was constantly exposed to music. I picked up the guitar, I think, between thirteen and fifteen and started songwriting and singing. At eighteen, I decided to take music seriously and got more into producing as well.

David Theni: My family was also very musical. We therefore had always tons of vinyls and CDs in our house. And my dad especially liked great songs and great bands. Guns’n’Roses, AC/DC, Led Zeppelin and all that kind of stuff.  Throughoutthat time, my parents put me into Austrian music schools, where I started out with the recorder and the flute. Later I upgraded to the piano, because that’s what I was supposed to do. But I didn’t really connect with the music, because it was too classical for me. At some point, I discovered the guitar. That was what allowed me to make the music I liked listening to. I didn’t listen to Mozart, I listened to AC/DC, and a guitar suits that a little bit better. I also lived in the US for a year. And the people there have a way to encourage you to do whatever you want to do, even if it’s hard. Much more then it was the case here. At least for me. So, when I decided that this is something that I actually can do and sustain myself with, it clicked and I took this thing more seriously. I started to make music and to produce more.

Now that your EP is released, what are your next plans? Are you planning on playing concerts or even going on tour?

Madishu: Right now, it’s a little hard to organize a tour, considering the whole corona-situation. What we have is a concert on the 24th of September at B72. That will be the first full-band-concert after quarantine. We hope that in the future it will be easier to organize concerts, but in the moment it’s like a gamble. Who knows if there will be the next quarantine.

David Theni: But that’s the live-part. We’re always working on new songs and make new videos. There’s always something happening in this whole content-thing. We work on ideas for new songs. Whether they’ll be released is a different question. If we think it’s good enough, we will release them and put more time and effort into them.

Madishu: Right now, there is a vision for an album, on which we want to mix R&B and Punk.

David Theni: We want to figure out what it means. You got it in your head, I don’t. It will be a fun experience to come up with something with which we both are happy.

Madishu: And also content wise, we are trying to engage more with the fans. We want to give them more insights into who we are as people. We try to make a series on Youtube, where we do random stuff like cooking, skateboarding and trying new stuff.

And how about your long-term future? Where do you think you will be in two years’ time? What is your vision?

Madishu: This question has with two answers. One is that I want to make a living out of music. I hope that it’ll get more stable throughout the next years. The others is that music is supposed to make people feel better and connect with each other. Music should help people in difficult times. Hopefully, one of our songs will be that song that helps somebody to go through tough times, for example after a break up. Or just that someone simply enjoys our song at a party. It would be nice to be a part of people’s lives.

Thank you for the interview.