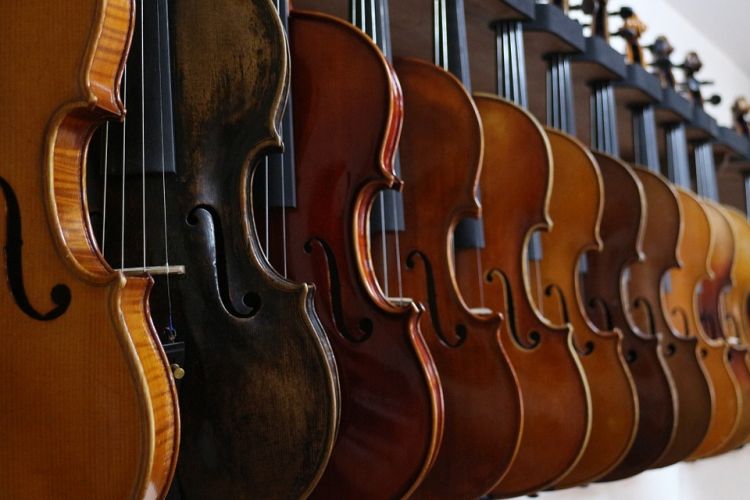 Latvia’s top symphonic player, the Latvian National Symphony Orchestra (LNSO), reintroduces the international workshop for young composers. Andris Dzenītis, one of Latvia’s most excellent composers, developed the tradition by attracting numerous young authors to workshops in various Latvia’s cities – Dundaga, Cēsis, and Mazsalaca.The workshops will take place on 19–23 August, 2019, in Rēzekne – a city in the heart of Latvia’s most peculiar region Latgale.

Workshop participants will have the opportunity to draw inspiration from the oldest layers of North Latgale’s traditional music.

The workshop will conclude with a performance of the participants’ new works in the opening concert of the LNSO Summer Festival at the Latgale Embassy GORS Small Hall.

LATGALE is a glorious lakeland in the southeast of Latvia. It is the poorest and the wealthiest part of the country simultaneously: a region with the least successful economy and the richest traditional culture and music. Historically, the territory of Latvia (and Estonia) adopted Lutheranism in the 16th century, except for Latgale, which was under Polish rule at the time and remained Catholic.
Another specific feature of Latgale is that the majority of population speak the Latgalian, or High Latvian language. This form of Latvian has its own literature, and the relation between the Latvian of the Lutheran regions and Latgale’s High Latvian makes an approximate analogy to the relation between the High German and Low German or even High German and Dutch.
Catholicism and folklore are the two dominant factors of Latgalian cultural identity. It is important to stress that Catholicism and folklore constantly interplay in Latgale: plenty of mixed phenomena have emerged due to Catholic music and poetry fusing with local folklore and traditional music.
It is important to understand the term bolss which has an important role in High Latvian musical terminology. The noun bolss has three meanings: 1) human or animal voice – sound produced by vocal cords, 2) vocal part in polyphonic music, 3) tune. The first two meanings are similar to those of the word ‘voice’ in various languages. The third meaning is used in folk music terminology in the Baltics and among some East- and South-Slavic peoples. It is still used in Latgale.

HOW TO APPLY FOR THE WORKSHOP

To apply for the workshop, the candidates have to submit mp3 audio recordings (recommended length 5 to 10 minutes) of two or three previously composed chamber music pieces or any other musical work written for at least four (4) instruments; the respective sheet music scores in digital format (pdf only), a detailed CV, photo and completed application form. All the materials must be submitted electronically to the workshop organizers by May 1, 2019.

The admission commission, comprising the workshop lecturers and members of the Latvian National Symphony Orchestra, will evaluate the submitted materials and choose five (5) international workshop participants. The selected composers will be announced by May 15, 2019.
The 5 participants selected by the commission will be invited to compose one short piece (maximum duration 7 minutes) for chamber ensemble of residing musicians.

The commissioned works should follow a common theme – Northern Latgalian traditional songs.
Northern Latgalian traditional song motives, melody or structure should serve as inspiration for your new composition.
The selected participants will have to complete and submit their compositions to workshop organizers until August 1, 2019.
The works must be 90% complete by that date. The workshop will be devoted to working with the lecturers and musicians to refine any details and make viable modifications.
The new works will be performed at the LNSO Summer Festival Opening Concert on August 23, 2019, in the Small Hall of the Latgale Embassy GORS.
The workshop is intended for young composers up to 35 years of age. However, the organizers may allow exceptions.

Each participant will engage in private consultations with all lecturers, present their music, take part in open rehearsals, seminars and discussions over the course of five days (on 19–23 August) in Rēzekne.
All conditions for creative individual work will be provided during the workshop, including accommodation, catering, free Wi-Fi, printer, etc.

The residing musicians will perform the compositions created during the workshop in a single concert. The concert will also be the opening of the LNSO Summer Festival. Everyone will be invited to enjoy the participants’ presentations in an informal atmosphere on every evening of the workshop.
There is a lake situated near Rēzekne. The programme also includes short excursions to a potter’s kiln and the renovated Lūznava Manor. The participants will also have the opportunity to hear a live performance by a folklore ensemble that fosters ancient traditional music.

Participation fee is 300 EUR. It covers all the facilities and activities listed above. However, travelling expenses to Latvia and back shall be covered by the participants.

Contact us for more information about the workshop: lnso@lnso.lv

Andris DZENĪTIS (Latvia, 1978)
Andris Dzenītis is one of the most talented, creative and internationally recognised Latvian composers of his generation. His music has been performed in Latvia and abroad: at the Warsaw Autumn Festival, the Gaida Festival in Vilnius, at Spelplan Stockholm, Märzmusik Berlin, Nyyd in Tallinn, Arēna in Riga, Bergen music festival, Klangspuren, Time of music Viitasari, ISCM World Music Days, Musica Viva and elsewhere by renowned Latvian and international performers, such as the Latvian Radio Choir, Sinfonietta Rīga, Ensemble Modern under the direction of Peter Eotvos, Anu Tali and Klemens Heil, Kroumata Percussion Ensemble, Paragon Ensemble, Caput, Deutsche Radio Philharmonie Saarbruecken-Kaiserslautern, Orquesta philharmonica de Gran Canaria, and Netherlands Radio Symphonic Orchestra under Karel Mark Chichon. Recent projects include commissions for the Leipzig Gewandhaus Orchestra and the Boston Symphony Orchestra, conducted by Andris Nelsons (premiere in 2018), and concerto for the award-winning Wind Quintet Carion and symphony orchestra (premiere in 2019).
Dzenītis is an active music critic and journalist. He also collaborates with Latvian visual artists as a sound artist, e.g. the installation Parahypnotic created with artists Oļegs Kļimovics and Gints Gabrāns participated in the International Art Biennale in Venice (2007). Teacher of composition and theoretical disciplines at the Jāzeps Mediņš Riga Music School and other schools in Latvia. Organizer and director of the biannual Young Composers’ workshops in Dundaga, Mazsalaca and Cēsis.
Andris was awarded the Lielais Kristaps Award 2017 for his original score for the film Firstborn. Dzenītis’ Seven Madrigals by e.e.cummings for mezzo-soprano and six instruments was awarded the first prize at the International Jurgenson Competition for young composers in Moscow (2005). Dzenītis is a two-time winner of Latvia’s top prize for music, the Grand Music Award – for his work Fides. Spes. Caritas (2006), and the saxophone concerto E(GO) (2014).

Anders NORDENTOFT (Denmark, 1957)
Danish composer Anders Nordentoft grew up in Horsens, Denmark. He studied composition at the Royal Danish Academy of Music, where his teachers were Hans Abrahamsen and Ib Nørholm. Further composition studies were with Per Nørgård at the Academy of Music in Aarhus. He also has a violin diploma from the Academy of Music in Copenhagen.
Anders Nordentoft’s starting-point was direct, energetic music with a strong focus on rhythm. His breakthrough came with the orchestral work Entgegen (1985) which featured juxtaposing oppositional musical elements. Throughout the 1990s he developed a more lyrical, melodic style, through which he sought out a more harmonious middle-ground that, in the composer’s own words, ‘explores the moderate but also expressive and infinitely faceted universe of friendship’.
This aesthetic is evident in works such as The City of Threads (1994), Hymne (1996), and cello concerto Sweet Kindness (1996).
Nordentoft received the Carl Nielsen Prize in 1997 and the Edition Wilhelm Hansen Composer’s Prize in 2002. His work list comprises more than 50 titles, five of them orchestral works and seven works for large ensemble/sinfonietta. He has also written works for choir and soloists in a variety of contexts.

Marco STROPPA (Italy/Germany, 1959)
Composer, researcher and professor Marco Stroppa was born in Verona in 1959. He undertook a range of musical studies – piano, choral music and choir conducting, composition and electronic music – and also studied computer music, cognitive psychology and artificial intelligence at the Media Laboratory of the Massachusetts Institute of Technology on a Fulbright Scholarship in 1984-86.
In 1982 Pierre Boulez invited him to work as a composer and researcher at IRCAM (Institute de Recherche and Coordination Acoustique/Musique), where he was appointed head of the Music Research Department in 1987. In 1990, he resigned to fully concentrate on composition and research. He taught composition at the Conservatoire National Supérieur de Musique in Paris and Lyon and since 1999 has been full professor of composition and computer music at the University of Music and Performing Arts (Musikhochschule) in Stuttgart, as successor to Helmut Lachenmann. A highly appreciated and active educationalist, he has lectured widely, has written several essays in a number of international reviews and is preparing a book on his own work with composer and musicologist Francis Courtot.
Stroppa’s oeuvre includes choral works, concert repertoires, music drama, radio operas and various special projects. In his compositions, he often groups several works around large cycles exploring specific compositional projects, for example, series of concertos for an instrument and spatialized orchestra or ensemble. He often draws inspiration from poetry, ancient myths, and personal contact with performers. His keen interest in sound and space has often led him to rethink the placement of the performers on stage to achieve a spatial dramaturgy that is revealed and highlighted as the music unfolds.